Those who started the internet probably had no idea that they were creating a communication network that would be used by more than half of the world’s population.
buy zoloft online https://www.sanjeevanam.com/products/wp-content/languages/new/zoloft.html no prescription

Even less did they probably ponder which rules and laws would apply.

More than a quarter of a century into the Internet age, there are still many questions about how the Internet should be governed.

How we use the internet has developed rapidly. The network has, among other things, changed how we communicate and how we do business with each other. And the development has hardly stopped. Rather, we are in the middle of it.

Gradually, the need for rules and laws for how the internet should be governed has become greater. But regulating a rapidly evolving network used by people all over the world is not entirely easy. Who should really take responsibility for what? Although we have lived with the internet for more than a quarter of a century, it is still not clear how it will be managed.

It is not entirely easy to grasp the control of the Internet and the complexity of online interaction. In an attempt to make the image of the Internet’s infrastructure a little more concrete, the Royal Swedish Academy of Engineering Sciences has described it as a lasagna. If the operation and control of Sweden’s digital infrastructure could previously be described as a “downpipe model”, where one player-controlled all levels of the infrastructure, today we have what the Royal Swedish Academy of Engineering calls a “Lasagna model”. Instead, the structure is built up of different layers with many actors in each layer, all of whom work together and make the internet work and accessible from our homes, workplaces or mobile phones.

At the bottom we have the physical infrastructure which, among other things, consists of fiber and masts, usually built by municipalities, fiber associations and sometimes operators. At the next level are communication operators, the neutral players who handle our data traffic transfer, regardless of which internet provider a company or your household has chosen to use.

In the warehouse above are internet and mobile operators, ie the companies that ensure that we have access to the internet. In the top layer, we find all services online, ie companies and authorities that offer all of us users the huge range of online services available today. So it’s about everything from email programs on the web to all our mobile apps.

To briefly summarize all the different actors and their roles is almost impossible. But to get an overall picture of how the internet is governed, you first need to understand what different driving forces and interests want to be involved and decide how the internet should work.

It is partly about technology and infrastructure, ie who will build the different parts of the internet and how the parts will be organized. It’s about money – who owns what on the internet and who should be allowed to make money from it. And it’s about content, simply who decides what can be said and found online.

There are thus several parallel interests on the internet and therefore the network is governed according to a so-called “multi-stakeholder” model. The multi-party model is a central part of how the internet works.

– The Internet is a global issue. Therefore, it is reasonable that everyone can have an influence on how it is managed and controlled, says Anne-Marie Eklund Löwinder, head of security at the Internet Foundation.

Even though there are organizations that work with individual interests, the general view is still that one needs to balance everyone’s interests in order for the internet to remain as open as possible. All so that the internet can continue to be a place where people can communicate, express their opinions, spread culture and do business.

– The Internet is based on some important basic principles and one of the most important is the end-to-end principle. Without asking anyone for permission, you can get an internet connection, connect your equipment and communicate with anyone in the world. It is an important part of the philosophy behind it. That is why the discussion about how the internet should work is so important and it is important that as many people as possible participate. So that we get a balance in the issues, says Anne-Marie Eklund Löwinder.

Important with dialogue about the internet

Internationally, work began on finding a common view on how the Internet should be regulated in 2003 – almost ten years after the Internet broke through. Then the UN began to discuss the governance of the Internet. The UN invited to the WSIS – World Summit on the Information Society. 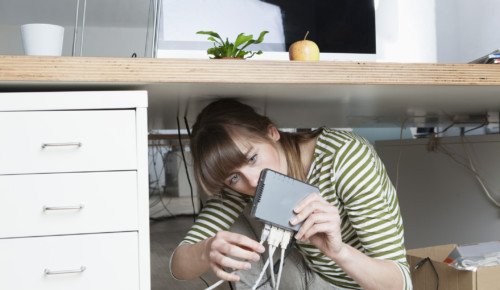 We take the internet for granted – but what is it really?

A network of computers. The invention from the “Cold War” sowed the seeds of the Internet – and changed the world forever.

In addition to the founding of the IGF, the fact that the UN actually began to discuss these issues was crucial to the Internet’s governance and future development.

– The fact that people from different backgrounds, environments, skills and needs from all over the world come together and talk about these issues means that there is a dialogue. And as long as there is a dialogue, you can find solutions to different types of problems and a consensus on what the internet is and does for us humans, says Anne-Marie Eklund Löwinder.

Of course, the fact that the UN stepped in and created a new organization did not mean that they were left alone in the arena. Several organizations already worked with internet control. IAB – Internet Architecture Board, which works with how the internet is built and which protocols are used is an example. IAB, in turn, acts as an advisor to ISOC, Internet Society, which works for the internet to be a free and open infrastructure.

Internationally, work began on finding a common view on how the Internet should be regulated in 2003 – almost ten years after the Internet broke through.

It also has a central role ICANN, Internet Corporation for Assigned Names and Numbers, which is responsible for the distribution of IP addresses, cataloging of Internet standards and DNS root zone, which points out and helps you find different top level domains such as .se and .com when you are on the internet.

The new UN agency IGF had strong support among many countries, organizations and companies – especially those outside the United States. Many of the organizations that were already engaged in Internet governance were American or based in the United States, which in turn has its explanation in that the Internet has its origins in the American defense. ICANN even obeyed the US government for a long time.

Over time, however, ICANN and IANA have been separated from the US government and most organizations, after all, work in symbiosis to drive the development of the Internet in a positive direction. There are also several regional organizations that are responsible for certain parts of the Internet’s infrastructure in different areas of the world. One example is the European organization RIPE, which is responsible for, among other things, the distribution of IP numbers in Europe. So, why are these issues that someone needs to decide on?

Well, the internet network itself is actually owned today by a number of privately owned companies – the internet operators. Of course, they have commercial interests and want to make money. Especially when their network is used by some of the world’s largest companies such as Amazon and Google, whose entire existence is based on the internet.

And what we use the internet for, the information we share with each other should take place within the raw marks of the law – laws that the parliaments of different countries enact. But even here, private interests are pushing to get laws passed that limit what you can and cannot do. It is also something that is constantly changing. File sharing of copyrighted material, for example, is perceived today as an obviously illegal act, but it was perhaps not as obvious when the first file sharing services came along. In more totalitarian states, there is also another aspect – where their ability to exercise control. Therefore, they try to restrict freedom online, for example by censoring and blocking content.

The basic idea of ​​the Internet is constantly being challenged

The original idea of ​​the free internet is constantly being challenged, not least by EU directives. The last few years have Newspaper houses and media companies wanted to ban search engines like Google to put excerpts of articles in the search results, because Google can then earn advertising money by publishing things that the newspapers create. This, after three years of negotiation and heated debates, resulted in EU new copyright directive 2019. And there are more examples of the private sector wanting to regulate how we should be allowed to use the internet – despite the fact that technology is constantly evolving in a way that we private individuals may not always appreciate.

Traffic growth on the internet is going at a furious pace, the need for internet capacity and the amount of data sent over the internet is increasing every year with new apps and things connected to the internet. How the internet should be governed or what rules should apply will probably never be completely painless or obvious. But that is precisely why the organizations that ensure that the internet works and develops are important for future development. So that we users can continue to use as free and open internet as possible, in the best possible way.